St. Olav Waterway was reopened with a pilgrimage from Turku in Finland to Trondheim, Norway in 2019. A rotating group of pilgrims carried a message of friendship from the Archbishop of Finland, Tapio Luoma, to the Bishop of Trondheim.

The journey began on May 25 2019, the day after the official opening seminar, when the pilgrims received a blessing on their journey from Turku Cathedral. A brand-new milestone standing in front of the cathedral proudly declared 1,200 kilometers to Nidaros, Trondheim, the resting place of St. Olav.

The inaugural hike lasted two months and over 500 people participated. Some walked for a few hours and others for weeks, but all carried the parchment a few steps onwards, towards Nidaros Cathedral. Every evening at the end of the day’s walk, the archbishop’s message was read aloud in Finnish, Swedish, or English, and often in all three languages. 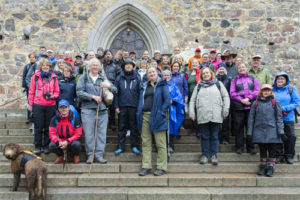 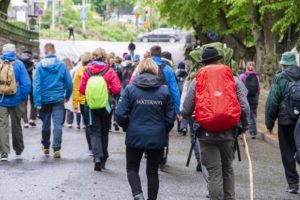 Over land and water

The sea route of St. Olav is the northernmost pilgrimage route that runs both on land and over sea. The opening hike took you through the streets of medieval towns, winding dirt roads, beside main roads, forest paths and mountain slopes in the spring weather.

On the other hand, those interested could kayak in the calm and sunny Archipelago Sea and enjoy the waves on a trip with traditional sailboats. The ropes of the tradition clinker boat Tacksamhet and Tjutt-Tjutt would creak, and the accordion would lull you on the deck of Albanus. On the Swedish coast, the opening of the route was celebrated by an entire sailing pilgrimage up the coast! 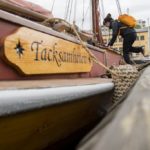 Pilgrims on the way

In the past, pilgrimages were made for religious reasons to holy places of Christianity, such as the tomb of Jesus in Bethlehem, the tomb of St. James in Santiago, and the tomb of St. Olaf in Nidaros. Today, the popularity of pilgrimage has risen again, but for the modern pilgrim, the journey is often more important than the destination. The pilgrimage is simple, close to nature, putting aside hurry and schedules and making room for silence.

During the opening hike, the message rolled from hand to hand, from pilgrim to pilgrim, always step by step closer to the destination. People and dogs from many different countries were involved. The youngest pilgrim was less than a year old and the oldest was over 80. Each participated in the hike in their own way. In Nauvoo, a local village association offered the hungry pilgrim a lunch break atop of a magnificent cliff, while a group of schoolchildren wandered alongside for a few miles.

The message rolled from Finland to Åland, from Åland to Sweden and from Sweden to Norway. It travelled on route such as St. Olav Waterway, Vikingaleden, Stråsjöleden, Helgonleden, Jämt Norge Vägen and Romboleden. “Thank you to all the Finns and Swedes who have carried the baton so far. We Norwegians are proud to do our part!”, The Norwegian pilgrim signaled when the scroll arrived across the border.

The parchment arrived and was handed to Bishop Helga on St. Olav’s day on July 29th. In 63 days, almost 100 people had carried the message of friendship from Archbishop Tapio Luoma from Turku to Trondheim.

St. Olav’s Waterway also received an unexpected counter-gift: a stone from Nidaros Cathedral, Europe’s northernmost pilgrimage site. The cornerstone, which weighs eight kilograms and is about 800 years old, was recovered during the renovation of Nidaros Cathedral. The stone is kept at the Pilgrimage Center in Turku Cathedral.

The communities are now bound together by a bond of friendship that is intertwined with the millennial history of pilgrims and pilgrimage routes. 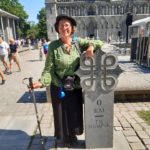 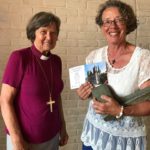 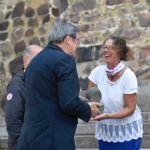 On YLE radio, you can also listen to the Vespers, an evening service that took place the night before the opening tour at Turku Cathedral. This ecumenical event was organized by the Evangelical Lutheran Church of Finland, the Orthodox Church and the Catholic Church. The music starts at 3:20, the program is introduced in Swedish.

The inspiring and diverse presentations of the opening seminar can be found on YouTube   The seminar program is found below the video in the description.

In 2022, a new pilgrimage will run from Savonlinna to Turku along St. Olav routes from May 26 to August 14, 2022, and then continuing along the St. Olav Waterway on August 14. towards the archipelago and Åland. The hike ends at St. Olav’s Church in Jomala on August 19th.

You can take part in a single hike or join for a longer period of time. The trek will test St. Olav’s mainland route from Savonlinna to Turku and convey a culture of togetherness, sustainability and hope during this time of climate change and pandemics. The theme of the hike is water.